Who is Your Hero?

I have a hero. Howard Wilson Trawick. He’s my dad.

The biggest thing for me was that he was my father. In the 60’s that meant something else than it does now. Growing up in the 60’s meant that children were seen and not heard. Parents were Providers, and my father did his duty by heading off to his job every day to provide for my brother and sisters and me. My mother did her job by staying at home and looking after the household. She ruled the household with an iron fist, and sometimes a wooden spoon. My mum was a tiny thing with a big voice and a no-nonsense attitude. She did not put up with any crap from us, so we naturally sneaked around and didn’t let her see the crap we did. Our parents were typical 60’s parents. Not a lot of hugging going on, and I never remember hearing “I love you” from either of them. But I knew they loved us. They didn’t have to show me. Or so I thought.

Dad was different. Dad was completely dedicated to his career, at least until his later years. He was a pioneer and an innovator in his field, which was Electrical Engineering for the Canadian Pacific Railroad. He spent 33 years working for the CPR. He retired at 60 after suffering a massive heart attack that left him with a different perspective.

My father was a people person. He met people all over the world, and he was the kind of person who remembered everyone’s names. He shook hands with everyone and you always knew his handshake was the real thing. Because when he shook your hand, he looked at you. Really looked, with open eyes that twinkled with open honesty.

Always a twinkle in his eye

I make no apologies for sounding like I put my dad on a pedestal. It’s where he belongs.

As a young teenager, I decided to take the goalie position when our regular goalie didn’t show up. We won the game, our regular goalie lost his position, and my dad was so proud! He grew up on the Saskatchewan prairie playing hockey, and goaltender was his position. He advised me, taught me, showed me, and encouraged me. He began to come to more games, and as I began to move up into more challenging ranks, he was right there with me. It was around then that he began to tell me that I could do anything I wanted, if I believed it. He also tried his best to teach me about saving money, but I wasn’t interested in that lesson.

My father was a social guy. He played golf and curling, he traveled quite often with his work, going to conventions and work functions, and he enjoyed going to parties. My parents were both partyers, though I realized after my dad was gone that it was Dad who was the mover and shaker around the social activities. Mum just tagged along and lived vicariously through Dad. 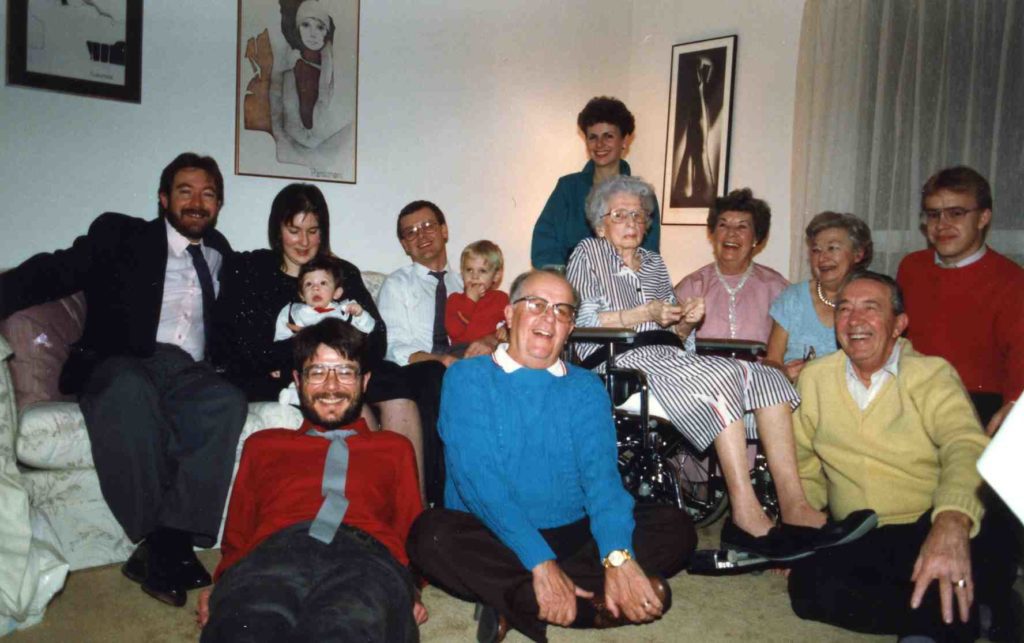 I don’t remember what we were laughing about, but Dad was laughing the loudest.

Dad’s life was shaped, in large part, by his career, but his career choice was determined by his military career. Oh, did I mention that my dad was in the military? No? Well he was!

My father enlisted from the prairies as a young, single guy, joining the Royal Canadian Navy after the start of World War 2. After his brief, hurried training, he found himself on the rolling deck of a Corvette, HMCS Quesnel, a sub hunter in the middle of the North Atlantic. Can you imagine a Prairie boy who’s never seen the ocean, suddenly having to deal with a winter storm in the middle of the nastiest sea, desperately working with his fellow sailors to keep their little boat from tipping over in 60 foot waves? 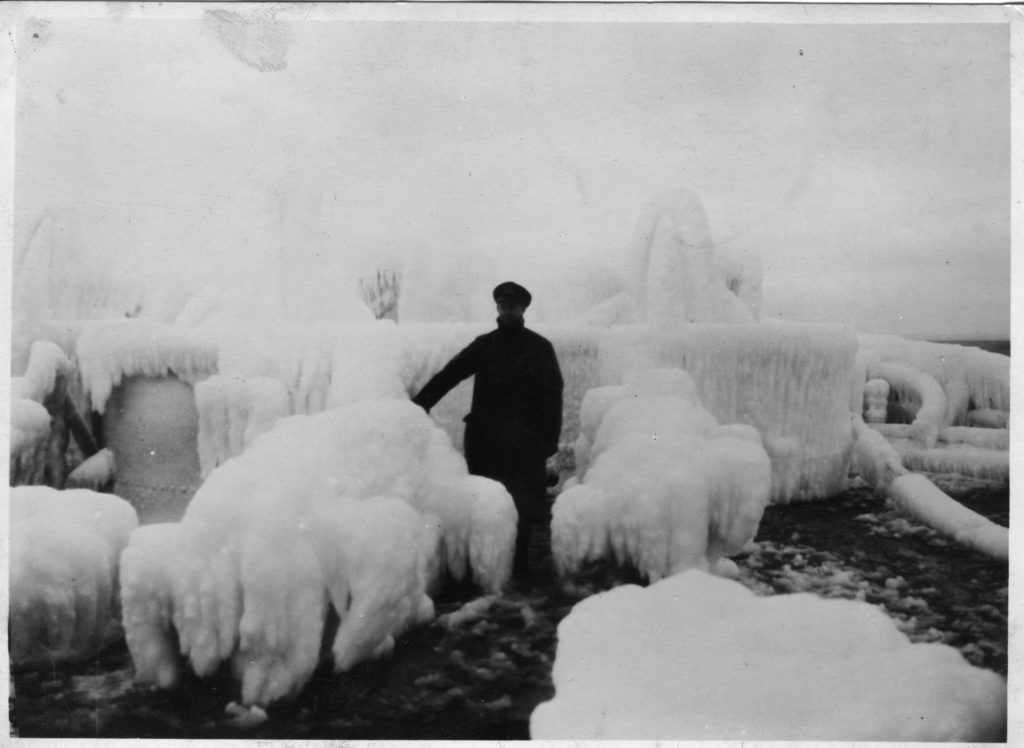 Not my dad’s boat, but this was what they dealt with in the North Atlantic.
Photo courtesy Robert Burns

I think my father did a whole lot of growing up in those terrible years, years that you and I can barely imagine. My dad was Chief ASDIC Operator, which meant he sat for hours at a console next to The Old Man, his captain, headphones held tight to his ears, listening for the distant, faint sound that was different from all the other sounds in the middle of a convoy. Listening for submarines. He was his captain’s go-to guy. If their convoy plundered into a wolf pack, The Old Man had my dad called to the bridge. It didn’t matter if he had just come off a 6 hour shift, he wanted Trawick on the ASDIC.

All of this was made even more amazing given that my dad was deaf in one ear! His captain didn’t know that, and neither did anyone else. My father managed to keep that hidden for his first two years in the Navy, until an unscheduled swim lesson was called, and the men had to jump overboard. Someone noticed some discharge from his ear and that was it for him. My dad also couldn’t swim. Until his death, he never learned to swim. He just didn’t like the water.

The crew of the HMCS Quesnel. Dad’s somewhere in the middle, below and left of the gun.
Photo courtesy of Bev Lundahl

After serving on two ships, he was sent ashore in Halifax to teach other sub hunters how to find their quarry. But it was those two years serving on little boats in an unforgiving sea that shaped my dad for the rest of his life. During those two years he married my mum, his teenage sweetheart, in Victoria. They were married and he went to sea very early the next morning, sailing down the Pacific to the Panama Canal and all the way up to Nova Scotia. Meanwhile my mother, newly wed, hopped the train to Halifax so she could find them an apartment and try to settle in. And wait about 4 more months before she saw her new husband again. Can you imagine? These were the times of war, and this was what was expected of people. Today we simply have no idea the sacrifices made by everyday, average people, just to make their way through their lives.

My father saw some terrible things during his time at sea. He didn’t talk about them much, but he would if he knew we were really listening. His experiences had cut him deeply, and he shared them with long pauses. I could see that he was back there, reliving these moments as he spoke. It wasn’t until he was suffering the early stages of Alzheimer’s that he spoke about them more matter-of-factly. Even then, the memories brought tears to his eyes. 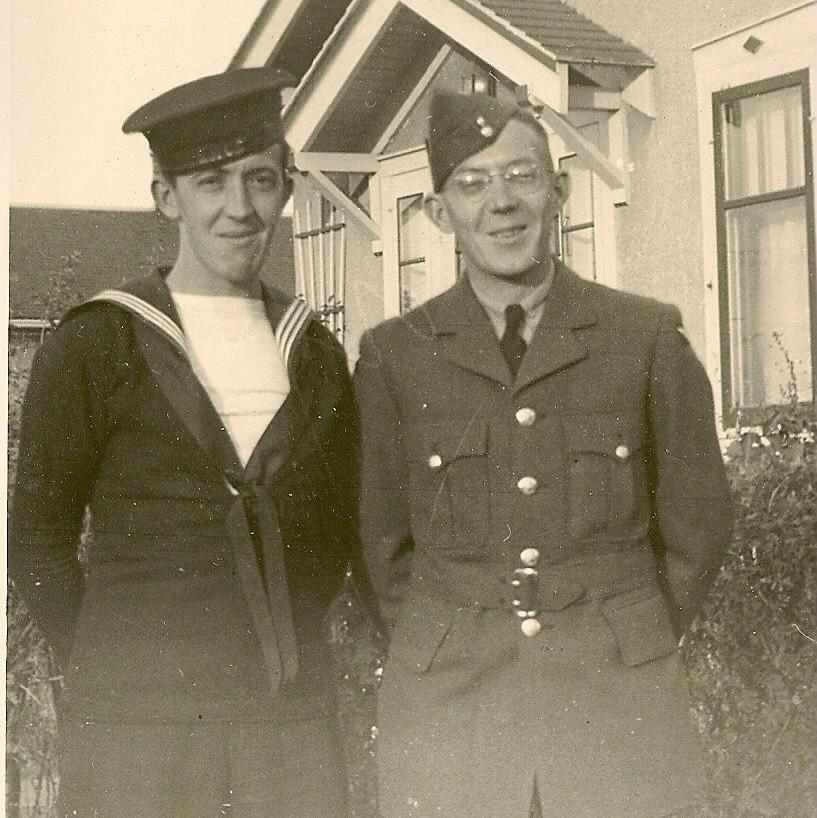 My dad the new sailor, with his brother Lyle

My father’s last years brought a change to him. He became lighter, more whimsical. He always laughed, and, like me, would often cry when he laughed. But he also became more affectionate. He hugged more, told me he loved me, and flirted constantly with my mum! She would get mad at him, but after he was gone, it was obvious this was something she missed from him.

I am now father to my own kids, and I strongly believe that my dad was the most influential person to show me to being the best dad I could be. I know I’m not the same as Dad, I hug my kids more, tell them I love them, and we are so much more emotionally demonstrative than my parents were. That’s okay, because the moral character of who my dad was is, hopefully, still alive in me to pass along to my kids.

Yesterday my children took part in a Remembrance Day ceremony at their school. Zachary had written an essay about Remembrance Day for his class, and he was selected to present it to the school. In it, he spoke about his grandfather’s service to the country, and his time in the Navy. I know without a doubt, if my dad were alive today, he would be a hero to my children.