Bite Down Hard and Pray For Lockjaw 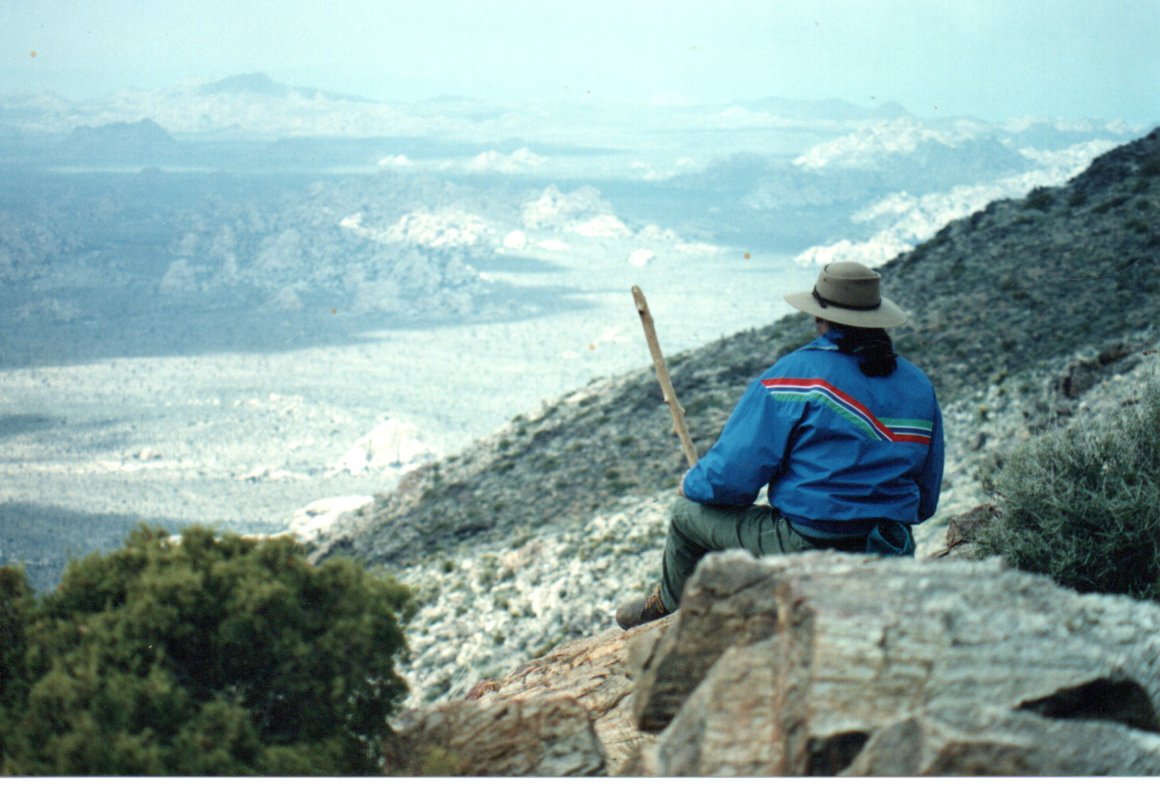 Or, How It Took Me 30 Years to Experience Joy

Can a young person really know when they’re experiencing joy? Does it come that easily to someone in their formative years? That certainly wasn’t the case for me.

Years ago I went on a road trip with my friend Steven to the desert Southwest. We camped and explored the barren hills of Death Valley, one of my favourite desert destinations. I’ve since been back several times, and it’s always a treat to explore the canyons and salt flats.

We set up camp outside the National Park boundaries. All the campgrounds were full. We didn’t mind. It was nice to be out on the public lands and away from roads. We didn’t have to worry about other people around us. We could forage for firewood, and make camp where we wanted.

After 3 or 4 days tramping around the Valley we headed south to what was then called Joshua Tree National Monument. It didn’t become a National Park until 2 years after our road trip.

For several days we hiked through ocotillo, cholla cactus and spindly Joshua trees. We set up camp amongst tawny Jumbo Rocks and toured remote palm groves. To a confirmed desert rat like me, this was as close to Heaven as anything on earth. And it also became a major turning point in my life.

On a warm day in March, Steven and I took the rocky trail up to Ryan Mountain, a 5,000 foot viewpoint in the heart of Joshua Tree. I remember being a bit obsessive about drinking a cup of water every 20 minutes. I read somewhere that, by the time you were thirsty, you were already dehydrated. And in the desert, dehydration was death.

So, every 20 minutes we’d stop for a cup of water. I also read that if you’ve had the correct amount of water, you won’t need to pee, because your body is absorbing all the water. Well, we had obviously had more than enough water because I must have peed on that hot, dusty trail a half dozen times!

Coming down from the hike in the late afternoon, we were both hot, tired and thirsty. Despite all the water. Our reward for completing the hike was a cold beer from the cooler. We sat on the trunk of the car in the warm afternoon sun and savoured the best beer we’d ever had.

Finally, too quickly, we finished our beers and prepared to drive back to our campsite. Just then, a beat up van turned into the parking lot and stopped across from us. The driver shut off the rattling engine and got out. He was a scruffy-looking man who looked about 50 but was probably much younger. A patchy, ten day growth of beard covered his face. He had a full head of grey-brown hair tied at the back.

He smiled easily as he shuffled around the front of the van, a bottle of beer in his hand. His skin was bronzed and deeply lined from many years in the desert sun. The man in the passenger seat leaned out the window and looked us over. His hair was short and dark, and his eyes were even darker. I felt uneasy about him.

The driver did not fill me with unease. His eyes were bright. They twinkled in the late afternoon sun, and I was almost hypnotized when he looked at me and smiled.

“Going up, or coming down?”, he asked me. He gazed directly at me as he spoke. I told him we had just finished our hike. He said, “Was it worth it?” I thought that an odd question to ask, but I answered that it was a beautiful hike with a view that was certainly worth the effort. He looked at me and smiled again. After a moment he said, “Everything worth doing requires some effort.” I agreed, but I started to feel a little uncomfortable.

My Story, Told To Me

He continued to look at me intently. I glanced over at Steven, who stood on the other side of the car, leaning casually on the roof. He had a puzzled expression on his face. The passenger in the van looked on and said nothing.

This stranger from the desert road began talking, and his words were like fingers slowly turning the pages of my young life. He spoke to me about my struggles, my worries and insecurities. It was as if I had left my diary open and unattended. As if he had found it and read it aloud.

I went on this road trip during a period of uncertainty in my life. I was unsatisfied with my career, my personal life left me feeling unfulfilled, and I just didn’t know who I was. The idea of experiencing joy was completely foreign to me. Teenage angst at 30 years old!

Somehow this desert sage tapped into my psyche and understood everything about me. I probably hadn’t spoken 40 words to this stranger, yet it felt like he had known me all my life. Like he had been my confidante for many years.

At first, I felt quite uncomfortable with his comments. But as he continued to speak, my mind opened up to him. It seemed that we were the only people there in that parking lot. Steven and the stranger’s silent companion had faded into the desert haze. It was just him and I. Like a rapt student, I was enthralled with this teacher’s lesson.

The stranger understood my dilemma. “I’ve been where you are, and I came out the other side.” He looked at me hard and said, “You just gotta bite down hard and pray for lockjaw!” He smiled. I gazed at him blankly. “There’s no shame in not knowing what you don’t know. You see something, you don’t need to know it. You just gotta do it. You’ll figure it out.”

But I didn’t figure it out. At least not right away. I was just too disconnected from myself to understand what he was telling me.

The old desert hippie wasn’t done with me. “If you ain’t experiencing joy in the small moments of your day, then what’s the point? You got to connect with your joy!” His eyes blazed. “It’s in there, man. You just got to connect with it. And when you do, you bite down hard and pray for lockjaw!”

It’s funny, but I have always had a memory of this strange man saying that term over and over. I’ve always just remembered that expression. “Bite down hard and pray for lockjaw.” It’s stuck with me all these years, and, for a long time, I thought that was all he said. But there was so much more.

You’ll Find What You Need

My lack of tenacity, my inability to “bite down hard and pray for lockjaw” had stopped me from pursuing a lot of opportunities in my life. I really hadn’t lived much of my life up to that strange meeting in the desert. I always believed I was living life on my own terms, unaffected by the influences of my family and friends. But I was still hamstrung by my own limiting beliefs. The life I chose to live was without passion, without commitment, and certainly without ever experiencing joy.

The desert stranger was finally done with me. Before he got back in his beat up van, he looked at me and smiled. “You’ll find what you need when you need it. It’s up to you to figure out what that is.” Then he laughed. “You’ll be fine!”

He fired up the engine, and his silent friend looked at me smiling for the first time. “You take care”, he whispered, and then they were gone.

I glanced over at Steven. He smiled oddly. “What do you make of that?”, I asked. He spoke slowly. “I think angels come in many forms.”

Almost 30 years have passed since that strange encounter in the desert. Half a lifetime ago. My last 30 years look nothing like my first 30.

When we returned from that road trip, I began changing some things. I took a new direction with my career. I looked at things a little more strategically. My attitude toward work changed, and I began experiencing new opportunities. I made new connections. I moved out of the city.

It took me another 4 years before experiencing joy. Really. What can I say? I’m a slow learner.

On a remote beach in Mexico, I almost cried for the overwhelming beauty of the moment. I continued feeling that joy for three more days! From then on, joy became a familiar friend.

I met my wife at a workshop exploring my passion, and together we embraced the exultant joy of bringing two amazing, beautiful children into the world.

I am experiencing joy in the little moments of my life. I’m filled with joy right now writing this sitting on a remote beach on Vancouver Island.

I never knew the name of the strange desert hippie who drove into my life at the end of a hot desert hike. I don’t know where he came from or where he went. Was he even real?

Real or not, his message has resonated with me for 30 years. Find your best life, live it, hold onto it and never let go. Bite down hard and pray for lockjaw!

5 thoughts on “Bite Down Hard and Pray For Lockjaw”