Does your child suffer from Nature Deficit Disorder? 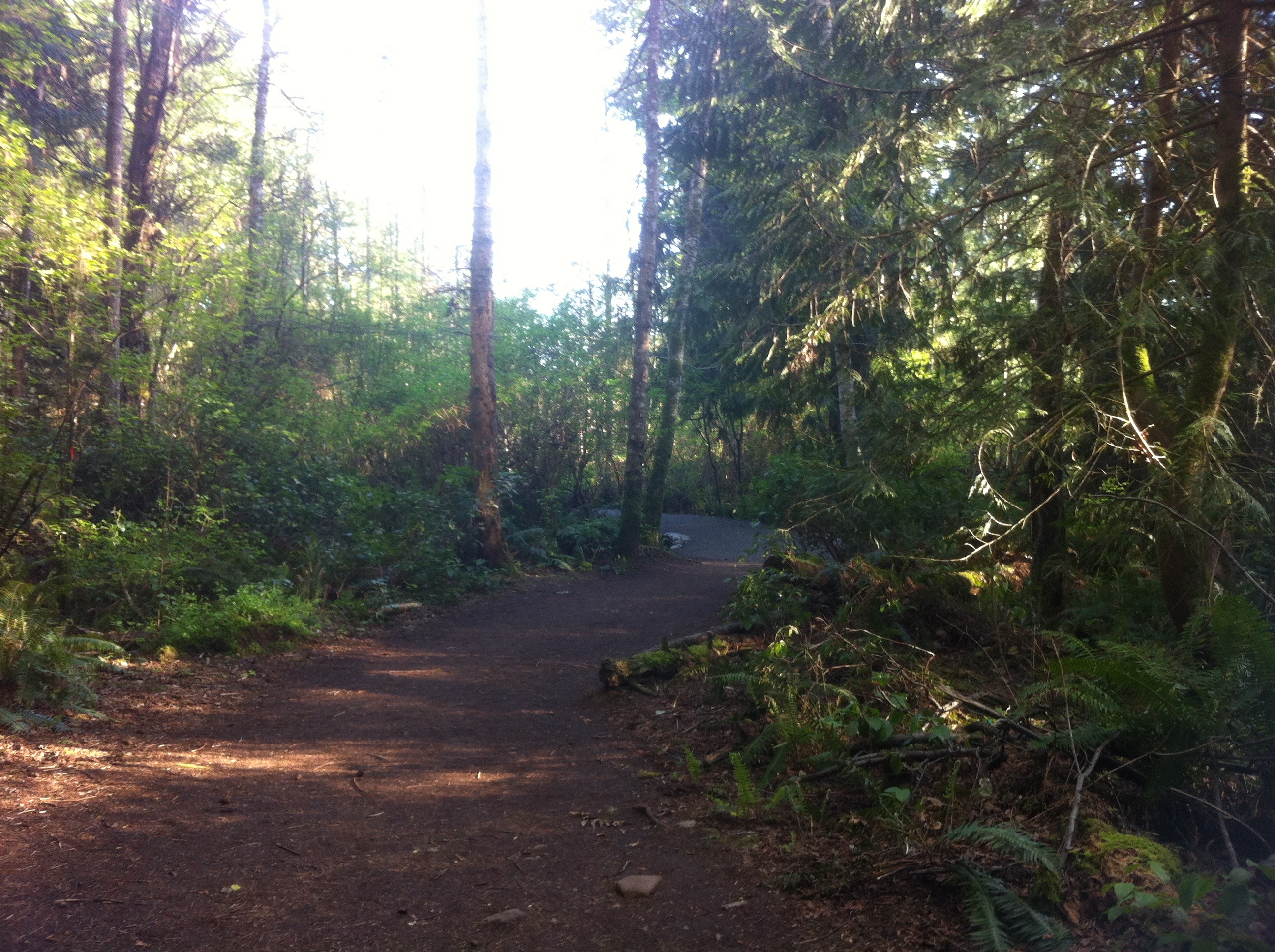 Earlier this year I came across an interesting study that involved children and their favourite activities. Researchers gathered together several groups of children and their parents, and asked them a series of questions about the kinds of things they enjoyed doing. Parents were asked, “When you were a child, what was your favourite pastime or activity?” Most of the parents had answers like “going to the beach”, “playing baseball with my friends”, or “riding my bike”. Pretty much what you might expect.

They asked children the same question, and most answered with statements like “playing video games”, watching tv”, or “texting with my friends”. Shocking? Not really when you think about it. All you have to do is look around in any public place and see how people, kids and adults of all ages, have disconnected from the natural world and become tied to their electronic devices. Our children are a product of us and our behaviour, and they will take what they learn from us and run with it.

We asked the same question to our children with considerable trepidation. What is your favourite pastime or activity? Our son (Mr. Minecraft) Zachary’s answer? Camping. Yay! Beth-Rose answered the question with “Playing with my Journey Girl dolls.” Whew!

It has become painfully, frightfully obvious that our North American society is raising a new generation of children suffering from Nature Deficit Disorder. I wasn’t the one who came up with this catchy term. That honour goes to a fellow named Richard Louv, who wrote a book first published in 2005 entitled “Last Child in the Woods-Saving Our Children from Nature-Deficit Disorder”. I recommend you pick up this well-researched book and have yourself a good read. What you’ll find is, at first, disconcerting. He paints quite a bleak picture of today’s child. One sentence stands out for me: “Our children are the first generation to be raised without meaningful contact with the natural world.” Does that concern you? If you have children, I hope so! 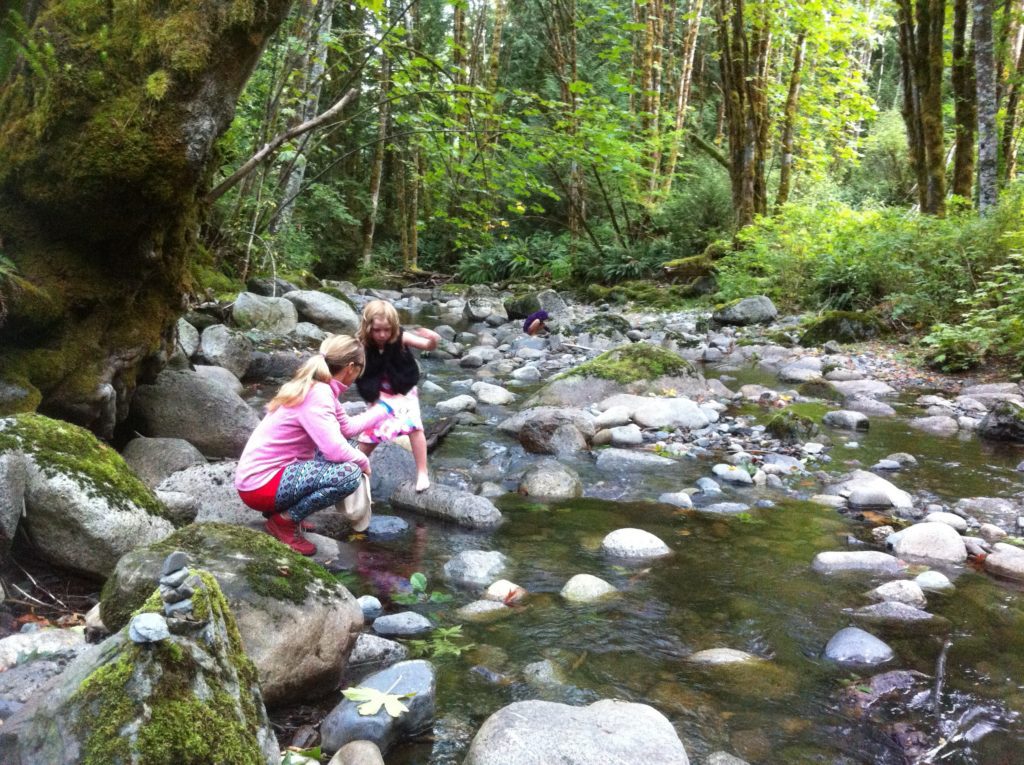 The lower Holland Creek Trail in Ladysmith, BC

Where I grew up, it was only a short run or bike ride to the nearest forest. And my friends and I, and many other kids I didn’t know, made that short trip several times a week. The woods were our playground, our theatre for our imaginations to soar. If you give a kid a play sword, he’ll become the world’s greatest swordsman. If you give a kid a stick out in the woods, she becomes a hunter or an acrobat or an explorer or anything else the imagination could create.

Our patch of forest had it all. There were trails that wound through the trees, up over hillocks and down into gullies, giving us opportunities to become motorcycle racers, or World War II flying aces. There was a creek that flowed year round, with a tire swing that hung from an ancient elm tree. There was an old, dilapidated tree house that some kids had thrown together some time before our time, and it became a fort, a castle, a clubhouse, a hideout.

The natural world connects to each of us, no matter how much we try to disconnect from nature. But in North America, we seem to be doing everything we can to de-nature ourselves and our children. Playgrounds have become little safety zones that keep our children from falling, banging, tripping over each other. Parents groups raise thousands of dollars so they can have the most state of the art playground for their little ones.

If you were to suggest to these well-meaning parents that you could save their PACs thousands of dollars and significantly improve their child’s physical and social development by adding in some boulders, bushes and a landscaped mound of earth, they’d think you had gone ’round the bend and wanted to take them with you. 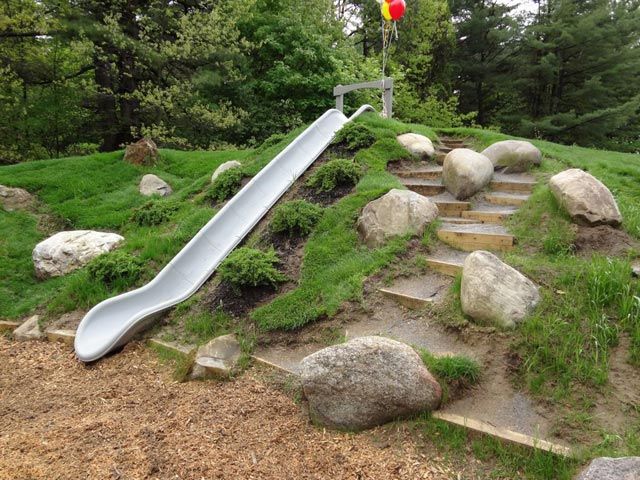 An Australian study of boys and girls aged 2 to 5 looked at their play preferences and playground equipment usage. In this study, the authors noted children’s preference for equipment and activities that allowed them to experience the sensations of height and speed such as slides, swings, monkey bars and climbing ropes.¹ But most of today’s play equipment found in parks and school playgrounds does little to build on or develop a child’s skills. It’s more than likely designed to mesh with the priorities of local government (with perhaps a strong focus on safety) rather than those of the children and their preferences for risky play.

Parents, including us, want to protect our children from harm, and we will do whatever it takes to keep them safe. But when our protection potentially interferes with the child’s ability to make the right choices, we are doing our children a terrible disservice and setting them up for serious problems later in life. Kids are going to fall down, get cut and bruised, sprain wrists and ankles, and sometimes break bones, no matter what we do. If we are restricting them from risky play to keep them from harm, we are not allowing them to learn how to manage risk, a pretty important skill to have as they get older and begin to make their way in the world.² It doesn’t matter whether it’s in a playground or in the forest, our kids need this opportunity!

Another problem with today’s children is free play has been replaced with organized activities, including team sports and music lessons. Nothing wrong with these in themselves; heck, both our kids take piano, do karate, dance and or sporting activities. The problem lies in substituting these activities with free play.  The same study I cited in the previous paragraph mentioned a group of middle class schoolgirls from the UK who displayed less knowledge about their neighbourhoods than girls from poorer backgrounds, because more of their leisure time was spent indoors or being driven to supervised activities, which could affect their ability to negotiate public spaces safely. Don’t you think as parents the goal should not be to eliminate all danger, but to control risk, and teach our kids how best to manage risks?

I wonder why it is that approximately 70% of mothers in the US engaged in daily outdoor free play when they were children, but only 31% of their own kids do the same?³ Have the outdoors become too terrifying? Or does it have to do with the huge increase of available electronic devices? Or the irrational fear that our children might be kidnapped by strangers? 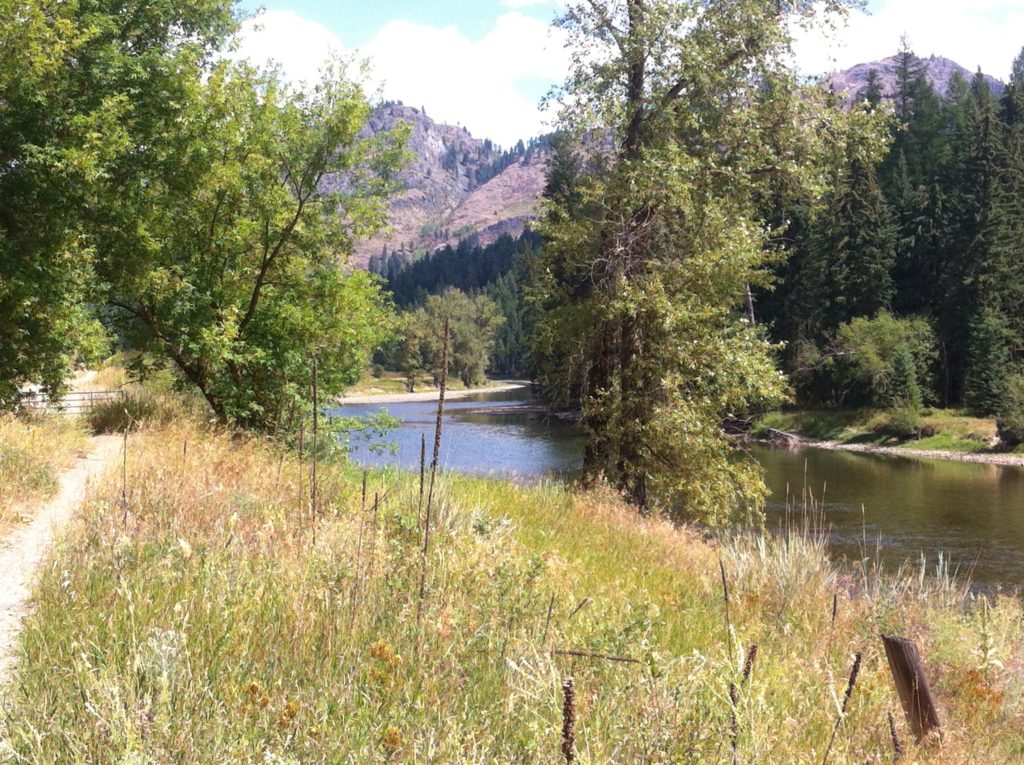 Does this look scary to you?

As parents guiding and teaching our young children in the ways of the world, we have a tremendous responsibility, and a wonderful opportunity. Children first experience the big, wide world through our eyes, through our actions. Educating our kids about the world must include the natural world, of which we are all a part. How we go about exploring it with our little ones makes a huge impact on their perceptions of this world. If we can’t get out in nature with our kids, we teach that nature doesn’t matter. If we can’t trust our children to make safe choices without us hovering over their every move, we send them out in the world ill-prepared to assess potential risks.

A couple of weeks ago we headed out on a beautiful April day for a family hike through the forest to the ocean. The trail was wide and well-marked, very easy to follow. And while the hike itself was enjoyable, with spectacular seaside views, the best part was watching my kids. Both Zachary and Beth-Rose spent as much time off trail as on it. They would dash down the path and suddenly veer off into the bush. There was so much more to see and explore that was off the trail, and they didn’t want to miss it.

As parents of two rapidly growing children, we sometimes lament that we aren’t getting them outside enough. I believe we could certainly do a better job of exposing them to the natural world. But as the days go by and I watch them growing toward their teenage years, I know they’ll be okay. Why? Because they’re curious about the world. They ask questions about the environment. They get excited about snakes and owls and squirrels. They could watch groundhogs for hours and be entertained enough to give us five-minute updates on their activities. As they continue to grow in the world, we’ll continue to encourage them to get out in it. To revel in it and be nurtured by it. The natural world is an awesome place. As a classroom, it is unparalleled.

The last word goes to Richard Louv, the author of “Last Child in the Woods”.

“I feel a sense of pride and relief that (my children) have grown well, and a deep grief that my years as a parent of young children is over, except in memory. And I am thankful. The times I spent with my children in nature are among the most meaningful memories–and I hope theirs.

We have such a brief opportunity to pass on to our children our love for this Earth, and to tell our stories. These are the moments when the world is made whole. In my children’s memories, the adventures we’ve had together in nature will always exist.”

Are your kids getting out in the world? Do you let them explore their neighbourhood? Send me a comment below, and please share this article if you enjoyed it.

3 thoughts on “Does your child suffer from Nature Deficit Disorder?”