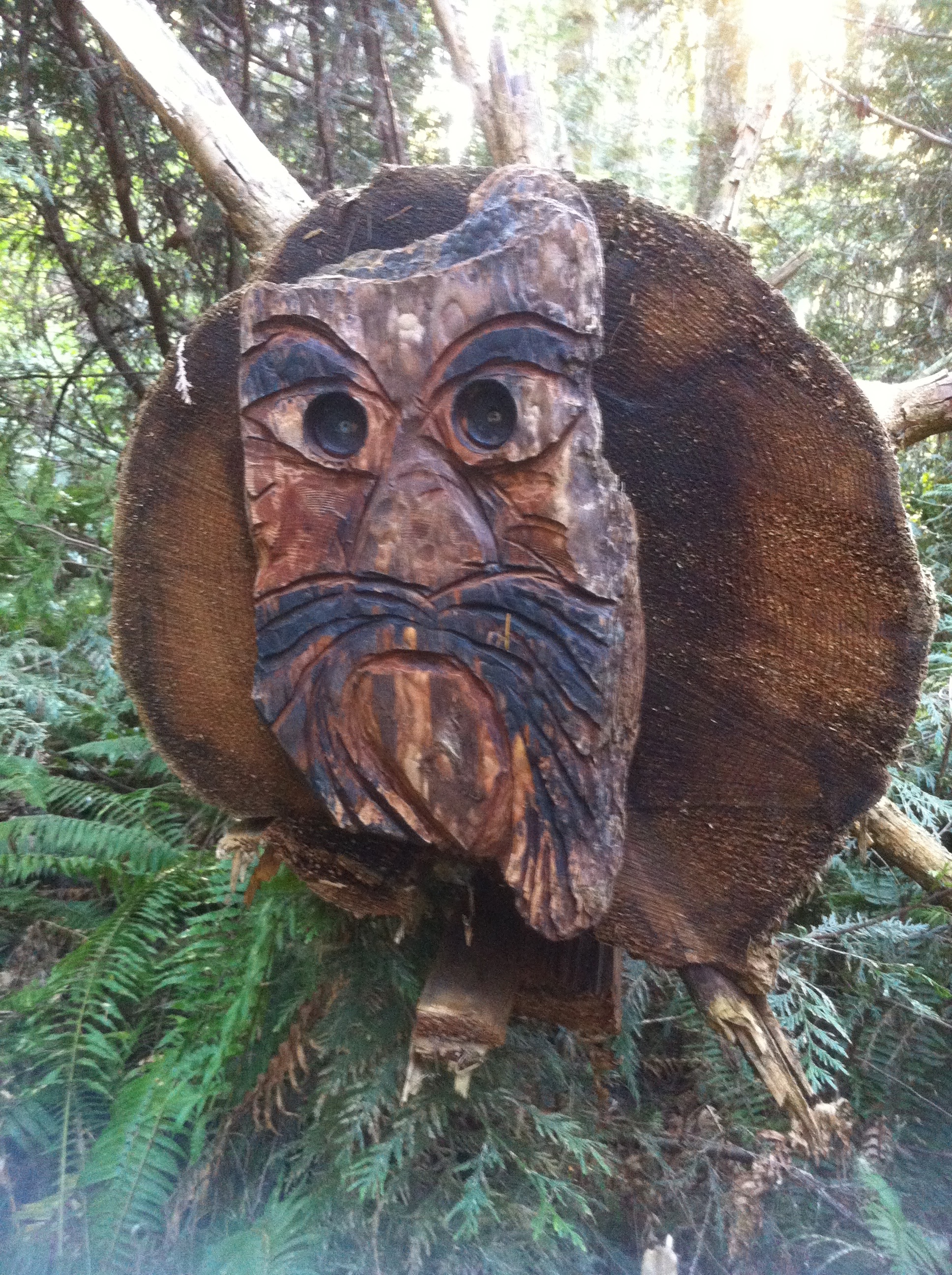 Living on Vancouver Island affords us lots of outdoor activity possibilities. Spring on the coast is a great time to explore, especially if you’re just emerging from a long winter’s nap. We can step out our door and in about 5 minutes be on a trail that can take us clear across the Island.

The trail itself winds through a stately forest of Douglas fir for just under a kilometer before coming out on the edge of the ocean. The trail them becomes part of Joan Point Park, a coastal forest reserve managed by the City of Nanaimo. There are no services at Joan Point Park, but the scenery more than makes up for that. Here you’ll find stunning views, a sun-dappled walk through the woods, and ample opportunities for scrambling across the sandstone shoreline. 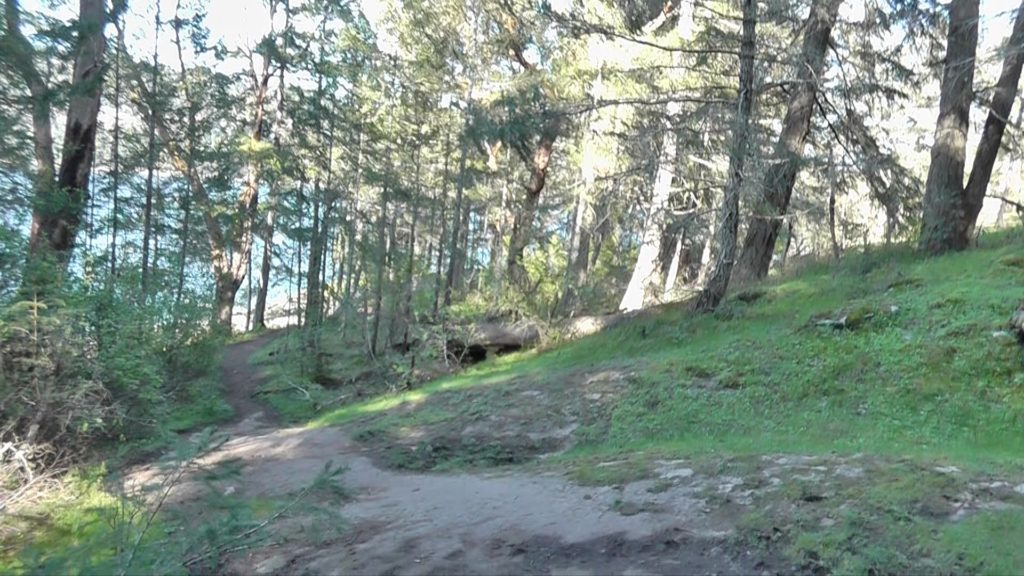 Reaching the end of the Joan Point portion of the trail brings you to the shores of Dodd Narrows, a turbulent maelstrom of water that gives boaters conniption fits if they arrive unprepared. During full flood or ebb  tide the current can be 7 knots and more, creating quite the set of rapids. The day we arrived at the shore, a group of sea lions were using the currents like a kid uses a water park, zipping downstream in a rush and swimming back upstream to do it all over again! Quite the sight!

But that’s at the end of the hike. No point in getting there yet when I’ve told you nothing about the hike to get there!

Starting at the trailhead at the parking area, we were dive-bombed by an enthusiastic hummingbird. who flew straight up into the trees about 60 feet and shot back down over our heads. Nearby nest was obviously keeping Mom agitated and busy. so we moved onto the trail quickly so as not to disturb her any further. We were confronted by a dinosaur! Sitting on a log just off the edge of the trail was a little orange plastic theropod, challenging us to go no further. As we progressed along the trail, we passed by several little plastic dinosaurs, some sitting on logs, some perched up in the knots of trees. We later learned that these were placed by a local kindergarten child. I don’t know how long ago he had done this, but apparently this is not the only trail in the area marked by little plastic dinosaurs. On future hikes we’ll have to keep our eyes peeled for this little landmarks.

We also began to notice the owls. Someone or several someones have carved little wooden owls and placed them on the trunks of trees. These lovely, quirky little artworks were distributed freely along the entire length of the trail. There are also several other trails throughout Vancouver Island that boast these little icons. They create a nice juxtaposition to the wilderness of the trails, and introduce some whimsy to the wildness. 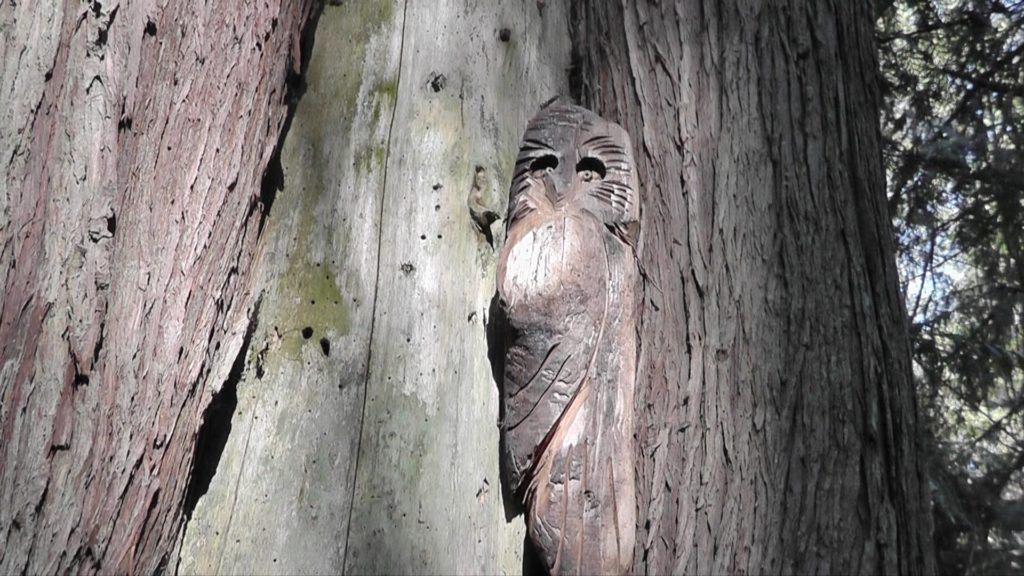 One of the many owl carvings along the Cable Bay Trail

My family got into the whimsical spirit of the Cable Bay Trail by using it to practice their heel clicks. Up and down the trail they ran, jumping up and clicking their heels. Characters indeed on a trail full of character! 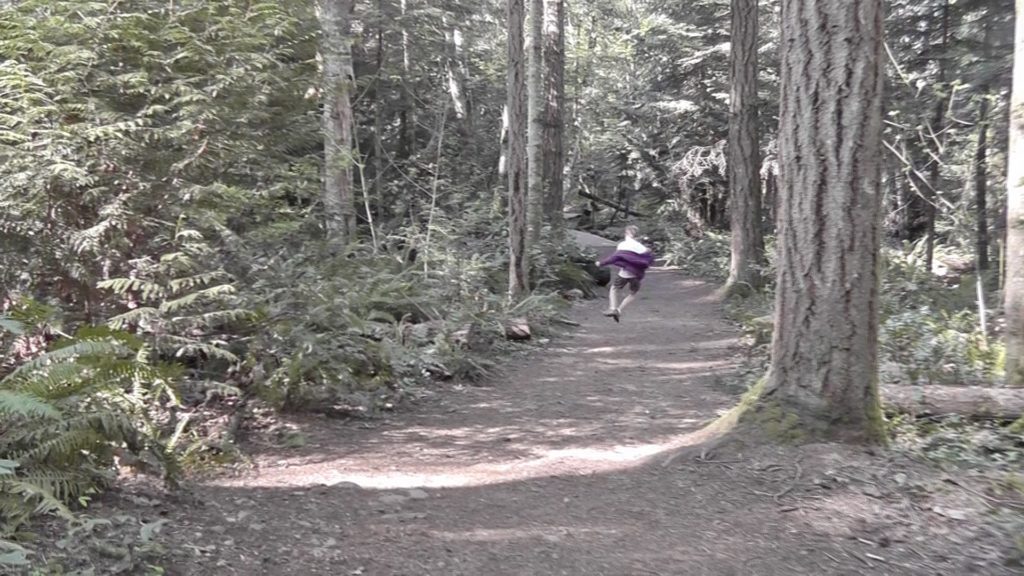 How much fun can you have on a family hike?

Zachary and Beth-Rose make the most of these family hikes. Following a trail is one thing, but when the opportunity presents itself in the form of an open forest floor, exploration off-trail becomes an adventure. Heather and I enjoyed watching them dash from tree to rock to hillock to hollow stump. A side trail leading off into the unknown became irresistible. My mind would sometimes conjure images of ravenous cougars patrolling the edges of the forest, but reason took over. Yes, we have cougar sightings periodically here, but it’s not frequent enough to stop our children from roaming. Besides, a mature cougar would be no match for the rage and protective instincts of Mama Bear Heather. She’d make mincemeat of any marauding carnivore in an instant!

The Cable Bay Trail ends at the shores of Cable Bay, looking across to Gabriola Island and adjacent to the Duke Point ferry terminal. A small creek enters the bay and provides a shoreline walk during low tide. The mouth of the creek is shallow and wide, with ample opportunities to explore tide pools and the meeting of fresh water with salt. 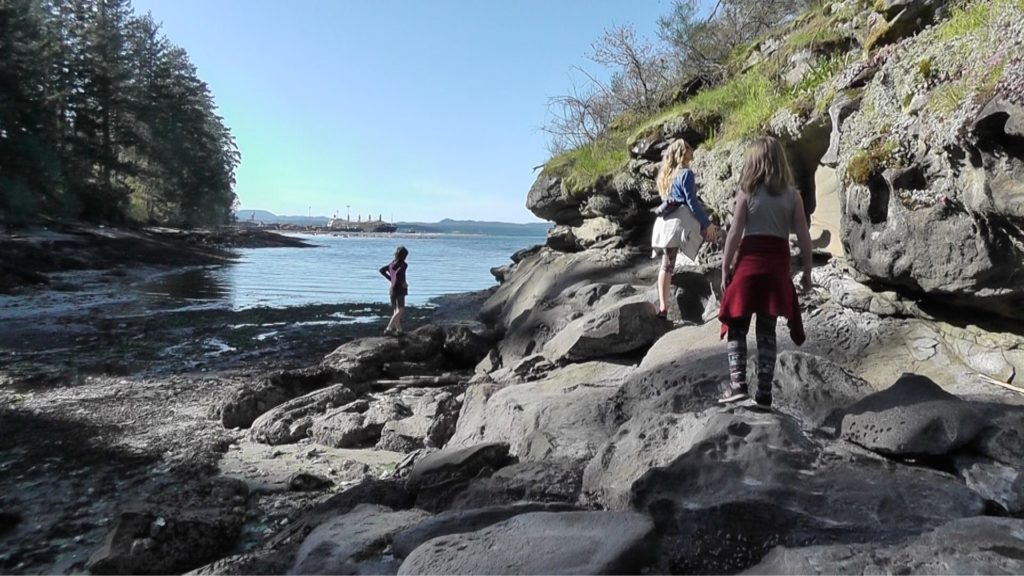 At Cable Bay the hiker has  a choice of routes to Dodd Narrows; cross a suspension bridge and stay on the path that meanders through open forest above the shoreline until it reaches the Joan Point lighthouse, or follow the sandstone carved shoreline around Cable Bay until it reaches Dodd Narrows, about a kilometer away. This is certainly the most interesting route, especially if you have kids who love playing and exploring on the fantastic sandstone shapes of the eroded shoreline. 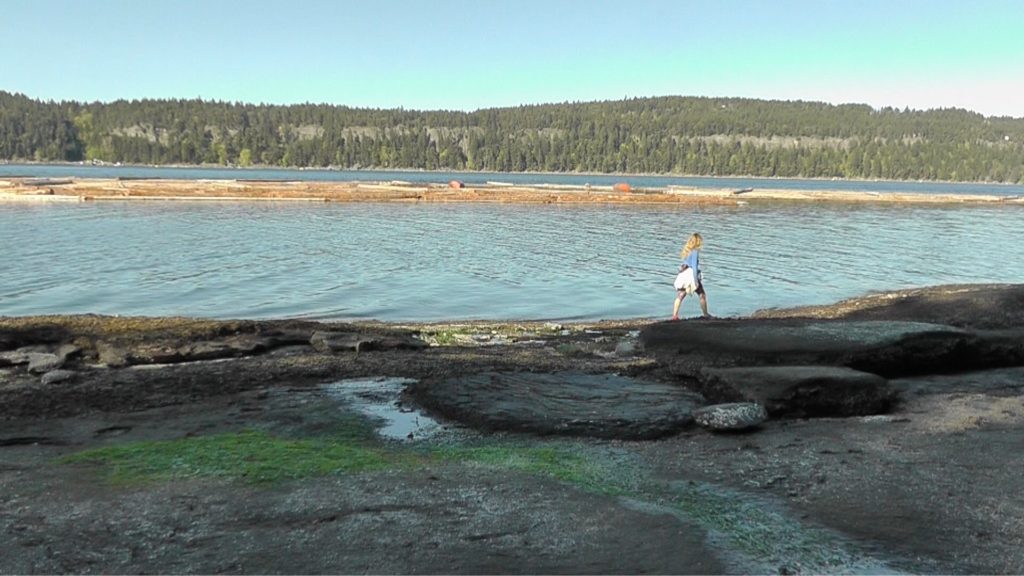 Joan Point lighthouse sits on the shores of Dodd Narrows, a chaotic channel between the Vancouver Island shore and little Mudge Island. Mudge sits between Vancouver Island and Gabriola Island in the Stuart Channel. Sit down on the sandstone shore and watch the water flow by like a river in flood. It’s mesmerizing! As mentioned earlier, we watched a small group of sea lions frolicking in the rapids. No boats were attempting the pass while we were there, but I have found several You Tube videos taken by boaters as they navigated the channel. I’m sure it’s a heart-stopping experience, especially for a beginner boater like me!

Returning can be done by the same shoreline route, or make it a loop by using the trail through the forest. Not as interesting, but quite a bit quicker. We were losing sunlight so we took the quicker path back to the trail-head of the Cable Bay Trail. From there it was just a matter of re-tracing our path back to the parking lot.

On the way back we had a chance to listen to a couple of owls calling each other. It was pretty cool to hear one owl off to our left hooting, and hearing the answering hoots off to our right.

Beth-Rose pooped out on the way back. It was close to 5 kilometers round trip, so her little legs were done. Plus they had done a few extra kilometers going off path and exploring the shoreline. For them, the total hike was probably closer to 7 or 8 kilometers. Not bad for smaller legs!

You can find the Cable Bay Trail and Joan Point Park easily on Google Maps, and the directions to the parking area at the trail-head are pretty easy to follow. Just remember to duck when the hummingbirds start to dive!

Have you been on the Cable Bay Trail? Can you recommend other good day hikes for families? Drop me a comment below and share your favourite family hikes. And feel free to share this article if you enjoyed it.